Galeri Selvin presents the works of 12 Turkish artists to the international art galleries, collectors and art enthusiasts at Art New York fair, where works by nearly 1,200 artists with 150 participating galleries from 50 countries. 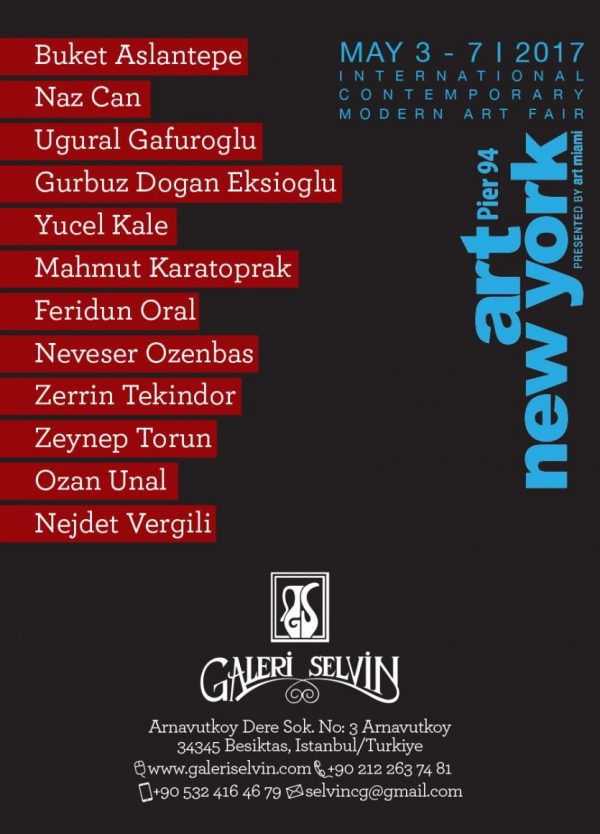 Held by Art Miami, one of the prominent organizers of modern and contemporary art fairs, and regarded as one of the most important art events in the U.S., Art New York fair takes place at Pier 94 between May 3 and 7, 2017.

Since its foundations in 1985, Galeri Selvin continues to devotedly support art and artists. For 32 years, the gallery has been professionally representing artists engaged in the field of plastic arts by opening gallery exhibitions and attending both local and international fairs. The gallery presented paintings, sculptures, original editions and ceramic works by Turkish artists to the international art scene at Stuttgart Art Fair in June 2016 and at Art Miami in November. Between May 3 and 7, 2017, the gallery will attend the Art New York Fair with notable Turkish artists including Buket Aslantepe, Feridun Oral, Gürbüz Doğan Ekşioğlu, Mahmut Karatoprak, Naz Can, Nejdet Vergili, Neveser Özenbaş, Ozan Ünal, Uğural Gafuroğlu, Yücel Kale, Zerrin Tekindor, and Zeynep Torun.

Graduated from Hacettepe University Painting Department, Buket Aslantepe has been based in Germany since 1996, and continues her artistic career in Stuttgart. Inspired by life, the artist composes her figurative works with deformations in perspective. The artist’s canvas paintings are ardent, vibrant, colorful, and even provocative.

Having graduated from Marmara University Fine Arts Faculty in 1985, the artist’s paintings and illustrations have been displayed at numerous exhibitions and biennales, both in Turkey and abroad, since 1986. He received the Runners-Up Award at Noma-Concour contest in Tokyo, organized by UNESCO in 1993, with the book “The Voice in the Forest” which he wrote and illustrated, and the Honorary Award at European Illustrators Biennial with his work titled “Dream Cats” in 2011. Conveying the ironic world of his illustrations to his ceramic designs, Oral continues to work at his atelier in Istanbul.

He studied at State Applied Fine Arts Academy Graphic Design Department. Interested in caricatures since 1977, the artist has so far won 64 awards, 23 of them being international. In addition to a number of mixed local and international exhibitions, Ekşioğlu has opened nine solo exhibitions in New York. His caricatures and illustrations have been featured on prestigious magazines including the New Yorker cover (three times), the Forbes cover (once), the Atlantic Monthly, and the New York Times. The artist also received the Sedat Simavi Visual Arts Award in 1998. 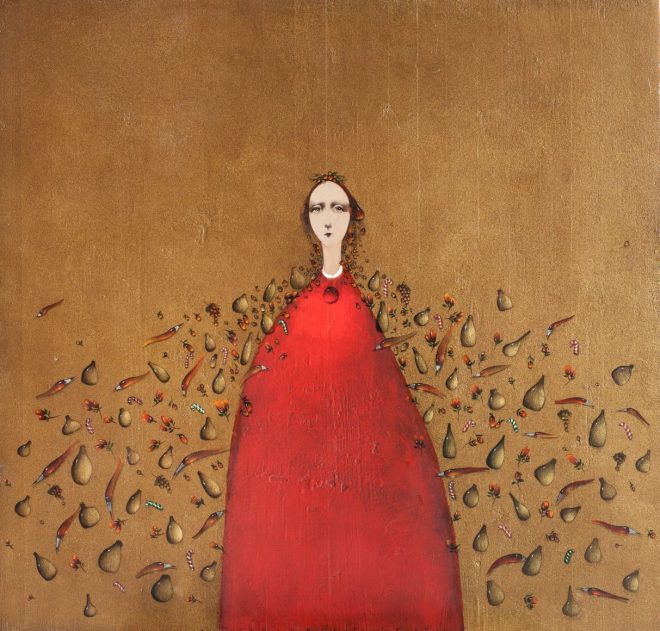 He graduated from State Applied Fine Arts Academy in 1978. His three works have been accepted into the Basel Plastic Arts and Caricature Museum. Between 1978 and 1981, he did graphic design in Switzerland (Zurich) and Germany. He also worked in the field of illustration, comics and painting at Bastei Verlag in Munich and Kelter Verlag in Hamburg. He did cover illustrations and comics for the magazine Genschpenster. His drawings have been featured in the German magazine Hörzu since 1985. Having moved to Kayseri in 2002, Karatoprak still teaches at Erciyes University Fine Arts Faculty. He is the recipient of Exclusive Award the Simavi Foundation, and Istanbul Metropolitan Municipality in 1984, Republic of Turkey Ministry of Culture in 1977; second prize in Skopje in 1977, and third prize Marostica, Italy in 1973.

Having graduated from Marmara University Fine Arts Faculty Textile Department, the artist has designed for renowned brands in the industry for many years. The artist’s works on silk threads reveal her unique technique and narrative. The artist tells a tale through raw silk threads that bear the secret of Bombyx mori, the silkworm. In this tale, the pure love of freedom and childhood are intertwined with silk threads that seem to float around in the air as if to be sealed to each other.

The artist graduated at the top of his class from Marmara University Fine Arts Faculty (TGSO, Beşiktaş) Painting Department in 1980. Painting the dreams and the reality on canvas, Vergili also reveals a richness of perception and evaluation, which he leaves to the viewer. In his paintings, in which concepts of time and space seem to change dimensions and become a little more abstract, the artist strives go on a journey in a map that goes beyond his landscape yet bears its traces. These almost abstract paintings’ heroes stand erect on the shore of their “modern lives,” sing songs of pure friendship, and invite onlookers to catch the true meaning of life and to play this game of theirs. Continuing his career in Turkey and Italy, Vergili’s works have been included in personal and corporate collections both in Turkey and abroad.

Graduated from State Fine Arts Academy (Mimar Sinan Fine Arts University) Decorative Arts Department in 1981 as the first of his class in the Textile branch. She studied illumination and miniature with Prof. Dr. Süheyl Ünver at Topkapı Palace between 1977 and 1978. The artist worked at the Mehmet Güleryüz Workshop for 4 years. Based in Istanbul, she continues her career at her own atelier. Her paintings have received the first prize at Italy Venice Art Fair.

He enrolled in the Dokuz Eylül University Fine Arts Faculty Graphic Design Department. However, he later left this department and started studying Fashion and Accessory. During this student years, he received awards at various design contests including Beymen Academia Design Contest and Leather Days Design Contest. He represented Turkey at Denmark-based SAGA International Design Center Young Designer Seminar. In 2000, he graduated with the dissertation titled “Limited Imagination: A Designer’s Perspective.” In 2001, he opened his workshop Atölye Pi Tasarım ve Sanat Atölyesi in Karşıyaka, Izmir. He continues his artistic career in various fields, mainly focused on sculpture.

Since the 1980s, Gafuroğlu has been one of the best narrators of pure, childlike and humanist excitement with a style that’s unique and personal throughout his journey in painting. Blending paint and canvas (the traditional materials of painting) with new materials and subject matters inspired by nature, he courageously took upon new openings. Whether canvas or stones/pebbles, wood or reverse glass painting, he constantly researches new things and makes new works. His meticulous technique and patience provides the artist to try new things that reflect his naiveté.

He graduated from Mimar Sinan Fine Arts University Sculpture Department in 2000. Creating his artistic style through various materials (such as wood, glass and copper) Kale’s masterful use of these elements reveal that he’s open to innovation, experimentation and exploration. His narrative of the act of seeing through fantastical elements and fairy tales in an idiosyncratic style draws attention to the great difference between looking and seeing.

She graduated from Hacettepe University State Conservatory Theater Department in 1985. She was trained by prominent teachers including Cüneyt Gökçer, Bozkurt Kuruç, Asuman Korad, Semih Sergen, and Lemi Bilgin. She received the Afife Theater Award three times: as Anna Andreyevna in the play The Government Inspector (2004), Annette Reille in God of Carnage (2010), and for her role in the play Who’s Afraid of Virginia Woolf? (2014). While pursuing a career in drama, she also continued studying at Bilkent University Painting Department between 2010 and 2014, and at Halil Akdeniz Atölyesi. With many of her paintings included in personal exhibitions, the artist has opened 15 painting exhibitions so far. 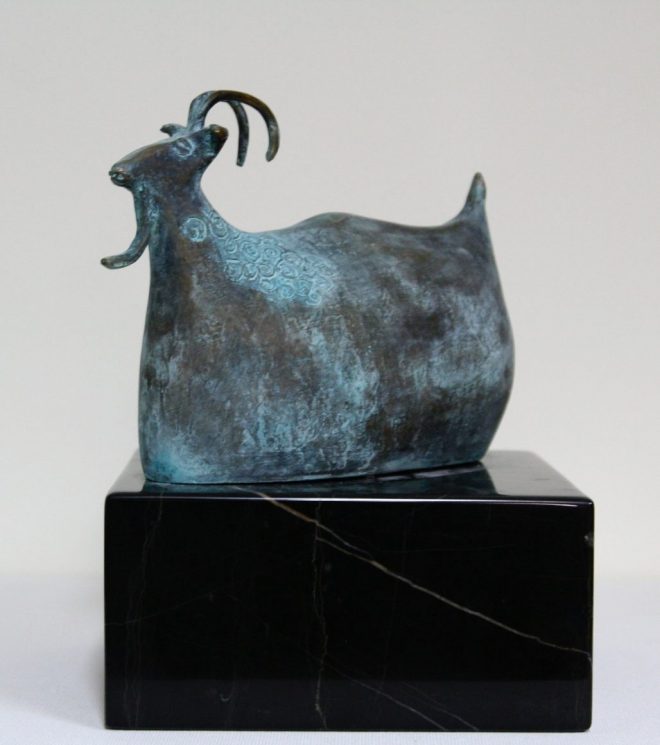 She graduated from Istanbul State Fine Arts Academy (Mimar Sinan University) Painting Department. She worked at the workshops of Cevat Dereli, Adnan Çoker and Neşet Günal. She also graduated from Turkish Music State Conservatory Liberal Arts Department. She worked with ceramic at Cevdet Altuğ’s atelier. She focused on this material and opened her own ceramic works show. Continuing her works in the fields of painting and ceramic since 1993, the artist has attended many mixes exhibitions in Turkey and abroad, and opened her solo exhibitions.