In West European countries, people, who have been struggeling with Cororna restrictions, come together in the streets since last year and protest against this new World order by dancing and singing. The song “Dancer Encore”, recorded by the French singer HK, became now the shared tune for the protests. Many European cities shoot their own flash mob videos of the song in their own languages.

The Corona regulations changed the social life upside down and created also collateral damages, which are not broadcoasted much by the mainstream media. Those concequences, indeed, seem for many even more serious than the gains of the pandemic restrictions. The citizens, who deny the pandemi and the ones who find the measures wrong, demonstrate against the pandemic politics since more then a year.

Among others, the musicians and the artists, who are treathened to loose their jobs and even their existence, lead creative street and social media actions. The satiric videos on YouTube, #allesdichtmachen#, made by 53 actors and actresses, lead in Germany to critical discussions about the current politics and the polarisation in the German society.

Sudden public events with a group performance, known as flash mob, is now a popular common protest in European cities and the French song, Danser Encore, is the common tune at the protests against Corona politics.

The Algerian-French singer Kaddour Hadidi, known as KH, had written new lyrics for the song Danser Encore, performed it with his band “HK et les Saltimbanks” and released it at Youtube on December 2020. Then followed the first flash mob versions of Danser Encore from French cities and soon after the German cities released their own flash mob versions in German. This trend is spreading across Europe and Danser Encore is performed as flash mob at street demonstrations in other European languages, including Flamish and Spanish.

The original version of Danser Encore stems from another French musician, Calogero Joseph Salvatore Maurici, in 2008. The Türkish musician, Teoman, made his own version in 2009 under the name Çoban Yıldızı (Venus) for his album İnsanlık Halleri. In the Turkish lyrics and video, Teoman had narrated the emotions of a young soldier in the battle field.

The people, who protest their governments with the Danser Encore song, have motivation like a young protester expresses himself in the 6. minute of the Münich Flashmob video.

“I am here, since I simply wanted to set an example with the power of the music and dance to remind the people what it means to be living. In my opinion it makes no sense to prohibit life to prevent us from death – since then I am already dead. I would like to live and I have an immune system that I trust. I also wish that the others would do so. Those who are afraid, they can of course isolate themselves and wear masks, but I would like to live.”

The Danser Encore movement with the motto “We dance for our lifes!” is a peacful and creative action, similar with Gezi Park Protest, which had statet in Istanbul in July 2013. However the Danser Encore has no influence in Turkey, yet.

The lyrics of the last version of Danser Encore that was written by the 45 years old French protest musician HK is as follow:

To keep on dancing

Let’s keep them at bay
For our mental health
Our social and environmental well-being
Our smiles, our intelligence
Let’s not be without resistance
The instruments of their insanity. 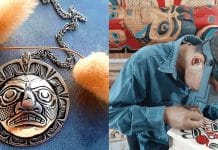 Tlingit culture: How much do we know about Indians? Interview with Jno Didrickson