A refrigerator, a toothpick, a tape roll, an apple or a water pipe… What do they have to do with dancing? For the Taldans performers, Mustafa Kaplan and Filiz Sızanlı, they are usual elements of dance, as much as life. With their experimental contemporary dance performances, Kaplan and Sızanlı are representing Turkey at cultural festivals around the word.

Dance, as a performance art, which replaces words and sounds with movement and gestures, is not always only for watching for pleasure. It might bear a deeper and stronger meaning than conveyed by language.

Modern Dance emerged in the middle of 20th century and stands for the dance style that is up-to-date and belongs to today’s life. It takes the traditions and techniques from ballet, classic and jazz dance, however, it has more creative and free corpus. As it aims to break traditional dancing rituals and bring a new dimension to dance and communication. The technical principal in modern dance is to generate aesthetic and authentic postures by using the body’s center of gravity.

Modern dance communicates foremost through body language; there is no facial expression involved. The neutral face, then, can be considered as a mask on the dancers face. The other distinctive characteristic of modern dance is that; it prefers simplicity over pomposity and individuality over being traditional.

Taldans as a body laboratory

Taldans was founded by Mustafa Kaplan and Filiz Sızanlı in 2003 and named after the “Theater Research Labratory” (TAL in Turkish) under Istanbul Metropolitan Municipality’s Theater, where Kaplan was supervising dance courses to meet the movement needs of dancers and actors/actresses. Kaplan and Sızanlı met at TAL in 1996 and started to dance together. After TAL closed its doors, they assembled their own dance company “Taldans” in 2003 and established the ÇATI Contemporary Dance Artists’ Association in 2005.

Sızanlı studied architecture and Kaplan electrical engineering and both started to dance in their university time. It seems like that their academic backgrounds play a major role in their choreographs. Indeed, one can easily notice the mathematical structure in their dance. Gravitation, reflection, collision, falling and momentum principals are the core of their work.

The dancers create their works by questioning the relation and responsibility of art and science in current society and by observing human’s cultural and public spaces. Kaplan and Sızanlı see them all as performance spaces and use the concepts of space and game. Taldans works also examine the body’s interaction towards space and acoustics. The dancers make their music by themselves, as a part of their performances. They use silence or the sound of the objects, rather than musical instruments.

The objects that the Taldans dancers use in their choreographies have various size and weight, which leads often to unexpected situations. They are, however, well prepared for those cases and can spontaneously direct the dance to another final. Every rehearsal could be a piece for itself or every performance a rehearsal of other possibilities. Which means that; Taldans performers can adopt themselves to different times and spaces. This is the case especially in the piece called “Dolap” (The refrigerator). All the pieces are meant to be performed on a theater stage, but they can be adjusted for park or street shows, as well.

Can a refrigerator dance? 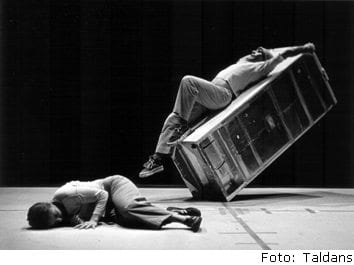 The interactions of a refrigerator and two aimless persons in hip-hop style is the main theme of the piece “Dolap”. The idea came to Mustafa Kaplan’s mind, when he was moving out from his apartment on the fifth level. Observing the workers who carried the heavy furniture down the staircase and their reflexes during the transport inspired Kaplan to transfer this behavior into an artistic arena. With his partner Sızanlı, he improved the performance with a refrigerator continuously in the last 20 years.

Constructed on the relationship between body and architecture, the play at first seems to be a duet performed by two dancers, but with a refrigerator taking the center of the stage, it effectively turns into a trio. The struggle with the imposing bulk of the machine makes us realize that; it is the object rather than the human being that plays a determining role in the process.

As a performance of working bodies, Dolap has its own timing according to its object size and weight. The two dancers communicate with each other through the fridge, and they even do not look at each other directly. The performance tough starts calm and monotone, it becomes quite tense and stressed after a while, as such a dancing partner can be sometimes dangerous.

During 40 minutes, we experience all kinds of mathematical relations of body and object. At the end of the show, the dancers sit on the lying fridge, their back facing to the audience and the light fades off. This somehow invites us to think what has happened in the last 40 minutes on this stage.

Based on an industrial metal object’s nature, Dolap proves us that dance can bring about powerful and impressive results from any situation. A refrigerator, of course, cannot dance. But with Kaplan’s engineering and Sızanlı’s architectural background having influenced them to establishing a common language, it turns into an interesting and creative dancing partner.

Mustafa KAPLAN was born in 1965 in Konya, Turkey. He moved to Istanbul to study Electronics and Telecommunication in Yildiz Technical University. During his studies, he started taking dance classes from Geyvan McMillan and learned “Graham technique”. He danced with the Modern Ballet Company between 1989 and 1992. He worked for the Istanbul City Municipality Theater as a choreographer and dancer for 10 years. He is one of the founders of “Yesil Uzumler Company”, “Dance Factory”, “TALDANS Company” and “CATI Dance Studio”. Apart from his own choreographs, he danced in Aydin Teker’s and Yann Marussich’s pieces. Although he graduated from the university, he never worked as an engineer.

was born in 1975 in Eskişehir, Turkey, and graduated from Architecture Department of the Technical University in Istanbul in 1997. She participated in many theater projects of the Research Laboratory at the City Theater in Istanbul (TAL) and is one of the founders of the CATI Association. She worked in artistic performances with Mathilde Monnier, Emmanuelle Hyunh, and Yann Marussich. In 2003, together with Mustafa Kaplan, she founded Taldans. Sızanlı is teaching at Eskişehir Anadolu University Conservatory since 2013. She has been dancing since age 21, with only a break of five months, when she delivered her daughter.