I, by chance, read the German newspaper “Die Welt” today, at a coffee place I often have time by myself. Like the Turkish newspapers, that have their journalists in prisons, your newspaper also counts your days and says that you expect letters from us. Dear Deniz Yücel; I hope you receive my letter. 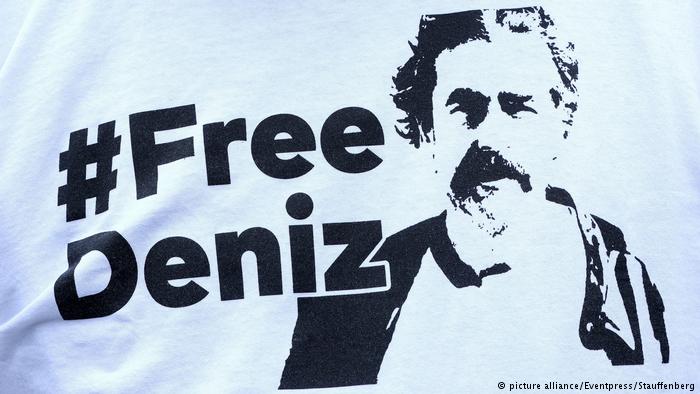 Does anybody get happy when he receives a letter from somebody he does not know? I have no idea about that. But, the people who visits prisons and Die Welt say that; those letters are valuable for those who live behind the iron bars.

I decided to write you a letter, just after I read that newspaper notice where I learned your address. Then I also thought to publish this letter in my newspaper. I will even write in English as well. So the ones who can not read Turkish, might also consider writing a letter; a good and old tradition of human beings. (Yes, Indigo Magazine has pages in English, too.)

I had never sent a letter to a prisoner before. Indeed, I had not written letters since a long time. But after what I read today, I felt like I can do something meaningful by writing you. After reading Die Welt, I also read a Turkish magazine, named “Bavul”, the edition of December 2016. There I coincidentally read an open letter by Ayşen Aksakal (Tamam mı devam mı?) and was touched by that. I felt as if she wrote that letter to me, although I do not know her at all.

I somehow feel attached to my name “Deniz”, which is also yours. I like its real and the symbolic meanings a lot and find the same name people sympathetic. I also learned that our mothers have the same name. That we both live in Germany and are occupied with same profession can be other reasons. But I think my main motivation, that I feel like writing you is that; you carry the Gezi Spirit, which is the first criterion I judge the people since 4,5 years.

Some say you are a terrorist.

How can a person named Deniz can be bad? (Exceptions do not break the rule.) Today’s Turkey is so polarized; that a group can call something “snow white”, while the others call it “pitch black” as a respond. However in those choices money, carrier and power have a good influence, I see.

Sure, you had never considered that; you would have been called by this title before. Or never thought that you were going to be happy moving to a dormitory from a cell inside there, while somebody outside feels upset because her diamond in her ring is too small. But like me, I guess, you do not get surprised any more.

You know well who Edward Snowden is.

The employer of American Intelligence Service who exposed its secret about being able to spy on everybody’s communications. Can Dündar, who is considered as Turkish Snowden, is the second most wanted criminal after Fethullah Gülen in Turkey. Can you imagine that? He recently got the “Whistleblower Price” in Germany. So; some call him “traitor” since he exposed governmental secrets, while the others call him a “hero” as he revealed the weapons that were transported to the most dangerous terror organization, to destroy a country with its people. Jut imagine; that black and that white are the opinions in Turkey now.

Not only Turkey but also the World goes crazy; brutal and strange things are happening.

There are millions who are against the political and economical powers but only a few, like you, suffer. We, the others outside, continue to live as usual; we travel, go out, get marry, bring new babies to this world ect.

Please do not judge us; this is how an typical human being is. We tend to conserve the normality, or even like to pretend as if nothing unusual is happening. In short; we have surrendered. We are, outside, the prisoners of Capitalism. We like to gain without giving effort, consume as much as we can without producing something and get ideas without knowing. So is the life easier, off course.

However, believe me, we are not really okay outside. Tears go down without a reason, we sometimes cry like mad by a small reason, we even often get in to depressions. We are not happy.

Indeed, the recent political and social events changed people a lot. They take strange decisions, chose unexpected things. I am not sure how much you can follow from inside, I will give you some examples here: The paragon of stability, Germany, can not establish a government since months, Hitler admirer party got 12 pro cent at that last German election, Austrians elected a 32 years young man as Prime Minister, Melih Gökçek resigned and the Great America is leaded by an ex-real estate king, who has no experience in politics. But I guess you know about the last example, as you were a free journalist as he was elected.

I watched the movie “Snowden” yesterday.

A Oliver Stone movie from 2016. In the film the chef of Snowden at CIA  said something like that: “The Americans prefer security rather than freedom.” I take the word “security” as “comfort zone” here. Not only Americans, we in Turkey, also try to preserve our life as it is, no matter we are content or not. Or we may be afraid of bringing a worse regime by trying to change the one we currently do not like.

Is that possible, do you think? I mean; getting caught by a bigger fire while running away from a relatively smaller one? Yes, that is also possible, like it was happened once in Iran. Such a story came to my mind when I watched another movie last week. A French movie about Persian Revolution, that is called “We tree all together” (Nous trois ou rien). The French/Iranian comedian, Kheiron, made that film in 2015. It is his real life story. You should watch these two movies when you get out. Cinema is wonderful.

You know what? I do not think we will end up like Iranians or Americans. We are different than them. The land we are coming from, the culture we are inherited give us, somehow, a power and a wisdom. How can we otherwise explain the survival of Nuriye, Semih and Esra? Yes, they are still on hunger strike.

And, after all, there are millions in Turkey who are attached to the Gezi Spirit. That means; we are going to win.

Well, I picked my words very carefully for this letter but I am still not sure that you will get it after the security controls at Silivri Prison. I am, actually, really carious about that. What do they really check out? Do they cross the unwanted words or they write a new letter with my naive sentences again? It should be a hard work for them. Anyway, I’ll also send you something to read. I hope you receive all.

By the way, I feel that 2018 will be different; everything will be clearer first of all. All the efforts and hard works will be rewarded, who deserves happiness will get it, only the ones, who are real criminals, go in to the prisons. I, at least, hope so. You should also keep your hopes alive. Take care and say hi to Silivri.